Goodness from a Gappy Grill

I have vivid memories of reclining in a citron green dental chair across from my anxious mother. I can just see her clutching her handbag in the corner of the aesthetically dull exam room. The room’s lights are dimmed, but a bright light shines over my head. A dentist’s whitish, latex glove hovers over my wide-open mouth. He is about to administer multiple shots of novocain in my top and bottom gum lines.

I think I had 9 teeth removed that day. I remember the pain of the novocain shots and the gasps of my mother in the peripheral, as the dentist, holding me down with his right knee, pulled, and cracked, and yanked every tooth out.

I didn’t like going to the dentist after that. Every visit thereafter, I would sit in the waiting room, traumatized and staring out the large bay windows of the second-floor office, imagining the timely defenestration of my dentist. I don’t think I’m alone in this. 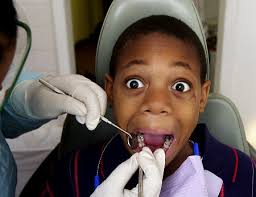 Recently our family visited the dentist. Similar to my early reminiscing, things did not look good. A diagnosed open bite for my daughter (orthodontia in her near future), cavities for my eldest, sliding teeth for myself, but worst of all, 5 cavities ranging in severity, for my husband, who is not insured. The children are covered with great insurance, but my husband’s and my policies do not cover dental. The bill for filling his cavities would be approximately $700 to $1,000.

He came home that day and said, “I’ll pay to fix the two most serious ones and leave the others for next year.”

Skip ahead one week. Andy, a friend of ours, had heard that Toby had 5 cavities and only planned to fill 2 of them. His wife had remembered awhile back that a local dentist had given their pastor a deal because he was in ministry. So Andy decided to ask Pastor Chuck for the reference. Maybe this dentist could get us a better deal and Toby could afford to fill all 5 cavities.

Sunday morning, Andy talked to his Pastor, telling him about Toby’s situation. His pastor, whom we have never met, agreed to help. Before Andy knew it, Pastor called him forward to the front during the service. Pastor handed him a microphone, and asked him to share Toby’s cavity story with the people assembled. A bit surprised and uncomfortable, Andy shared what he knew.

Later that day, I received a text from Andy explaining, “So money is coming in and I have some dentists to call… I was trying to be discreet but Pastor Chuck says I gotta learn it doesn’t work that way in the kingdom… Now, do we have an estimate from the dentist to get it fixed? I cannot have the freshly minted Reverend Toby rolling to his first church with a gappy grill.”

Five days later, Toby received a phone call to set up an appointment with Pastor Chuck’s dentist. Seven days later, an envelope filled with cash was handed to me to cover the costs of Toby’s treatment. This morning at 9am, Toby will get all 5 cavities filled.

In the midst of yet another dental dilemma, we are actually excited to visit the dentist. Not because the treatment is relaxing or the diagnosis good, but because there was a guy who knew a guy who asked a group of people who called a dentist and who all said they’d help out. And all of these people have one thing in common. Yes, they are generous. But it’s more than that. They believe they are a part of a kingdom and in this particular kingdom (where God reigns), things work differently. They give when there is need because they see themselves working along side God with gifts God gave them. Which is a different sort of generosity. Their generosity stems from a different source. Not from an intrinsic humanitarian source, but from a state of thanksgiving and appreciation for the Source of all good things. God.

Do not be deceived, my beloved brothers. Every good gift and every perfect gift is from above, coming down from the Father of lights with whom there is no variation or shadow due to change.”

Thank you so much!

3 responses to “Goodness from a Gappy Grill”