“A great multitude of people… came to hear Jesus and to be healed of their diseases. And those who were troubled with unclean spirits were cured” (Luke 6:18).

Who am I? I bravely stood nearby during the horrific crucifixion of Jesus. I miserably watched on as Joseph and Nicodemus buried Jesus’ lifeless body and solemnly sealed the tomb. Who am I? Before Shabbat began that evening, I dutifully prepared the proper spices and ointments for Jesus’ burial. Early the morning after Shabbat, I rushed with friends to the tomb to finish Jesus’ burial. Who am I? I was among the first to witness the empty tomb and the angels who were there waiting to explain. Who am I? When I stood alone in the gardens of the gravesite, confused at what I had seen and heard and physically upset by the missing body, the living Jesus appeared to me and gently spoke my name… “Mary.”

After Jesus healed me, I, along with a few other healed women, joined the newly appointed twelve apostles and followed Jesus. The Bible says that I was among the women who supported Jesus’ ministry out of their own means. In other words, we were not only counterculture disciples (rabbinic tradition did not allow women followers), but also financiers. We were passionate about Jesus and what he stood for. Why? Because he had saved our lives.

That Easter morning, when I saw him through my thick tears, I immediately grabbed hold of him. I clung to his risen body and worshiped him. I didn’t want to let him go. I think I was beginning to understand that I could follow Jesus for an even greater reason. Yes, he had healed me from seven evil spirits. For that, I am indebted to him. Yes, I had witnessed his power over the physical ailments of so many others and his power over the natural elements. I had listened to him teach with great authority the things of God and marveled at his eloquence. I had even witnessed him forgiving the sins of the people he so evidently cared for. 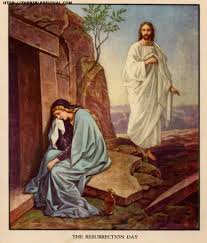 But on that Easter morning, I was favorably blessed to be the first to witness his power over death. I had been passionate about his healing power, his teachings, and his ministry among the people. Now I was passionate about the Savior of the world. He had saved my life again.