“And they came to Bethlehem at the beginning of barley harvest.” Ruth 1:22b

When I taught English in Taiwan, I used to tell my students that if they could master weather terminology, they could confidently hold a conversation with any American. Weather is where we start our conversations. It’s what we talk about when we don’t know what to say. And if there were no changes in the weather, some of us might be at a loss for words.

Weather terminology can also be useful in describing the seasons of life. Sunshine, for example, is always good. It means prosperity, good fortune, or God’s blessings. Rain, despite its necessity, is generally bad. It denotes depression, suffering, or paucity.

In the opening chapter of the book of Ruth, Naomi and her daughters-in-law, Ruth and Orpah, were in a season of rain. Naomi with her husband and two sons had moved to a foreign place (Moab) to escape a famine in their own land (Israel). While there, Naomi’s husband died. Her sons married Moabite women and after a time, both of Naomi’s sons died as well, leaving all three wives destitute. As Naomi prepared to return to her homeland, she told her daughters-in-law, “The hand of the Lord has gone out against me” (Ruth 1:13), and she encouraged both Ruth and Orpah to return to their people and seek a possible better life. Orpah followed Naomi’s advice and returned to her people, but Ruth clung to her mother-in-law. She then spoke one of the most beautiful oaths in the Bible.

“Do not urge me to leave you or to return from following you. For where you go I will go, and where you lodge I will lodge. Your people shall be my people, and your God my God. Where you die I will die, and there will I be buried. May the Lord do so to me and more also if anything but death parts me from you” (Ruth 1:16-17).

The opening chapter concludes with Naomi realizing Ruth’s resolve and the two of them traveling together to Naomi’s hometown, Bethlehem. The last sentence of the chapter states, “And they came to Bethlehem at the beginning of barley harvest.” 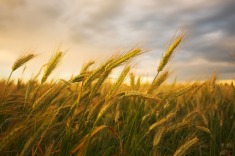 The rest of the story takes place during the barley harvest. Ruth meets Boaz while gathering barley for Naomi and herself. He owns the fields where she gleans and takes an interest in her. He makes sure she is safe and asks his reapers to leave more for her to collect. Later Boaz and Ruth’s engagement is solidified at the threshing floor with six measures of barley.

Israel divides its year into two seasons: the rainy season and the dry season. The barley harvest normally occurs at the end of the rainy season. Naomi and Ruth were both literally and figuratively coming to the end a rainy season: a season that had initially left Naomi empty and bitter. Yet God was not fit to leave Naomi in such a state. He was about to bless her immensely through her foreign daughter-in-law, Ruth.

I don’t know whether God causes rain to fall in our lives or if he just uses it. In my life, I know that sometimes rain has been paradoxically good. Whenever I have experienced a time of rain, whether it was a light drizzle or a torrential downpour, it inevitably forced me closer to God. And getting closer to God has always been good. When I arrive at the other side of a rainy season, I can look back and be grateful to God, because I know that if there had not been a change in weather, I would not be sitting in the center of God’s harvest.

“We know that all things work together for the good of those who love God—those whom he has called according to his plan.” Romans 8:28

2 responses to ““And they came to Bethlehem at the beginning of barley harvest.” Ruth 1:22b”